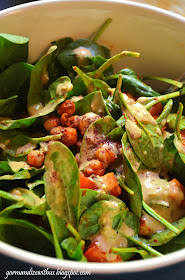 This delicious salad uses four spices from my overflowing spice rack - and all of them red, giving this salad a lovely red-orange hue. Chickpeas fried in chilli and sweet and smoked paprika with a creamy olive hummus dressing and a sprinkle of middle eastern sumac.

Chilli
Well, you all know about chilli. There are hundreds of varieties of chilli and they have a long history in many countries. There is evidence that chillies were eaten by Mexican Indians as early as 7000 BCE. In modern times chilli has become a commonly used all over the world in a myriad of ways. Chillis apparently contain more Vitamin C by weight than any citrus fruit and are found in our spice racks in dried form, flakes and many powdered varieties including chilli powder, hot paprika and cayenne pepper. Chilli is also purportedly excellent for weight loss as it speeds up the metabolism (in my experience it also good in this regard because it limits the amount of food you eat - because I can't eat as big a quantity of really hot food as I can mild food!). The heat of chilli can depend on what you cook your chilli with - oils and fats can mollify the heat of a dish so adding a high fat coconut milk can tame your curry. When eating a super chilli dish it's natural to reach for a glass of water - but don't! Water will actually make it worse - the best relief will come from a spoonful of sugar, but beer is also a good accompaniment. Milky drinks using yoghout or coconut milk are also a good option.

Paprika
In the same family as chilli (Capsicum family), paprikas origins go back the same as chilli - to the Mexican Indians in 7000 BCE. However, it was the Spanish that first turned these fruits into a powder after Christopher Columbus brought them back to Europe from the new world. Paprika in it's many forms is now ubiquitous in Spanish and Hungarian cuisines in particular. But during the Turkish occupation of Hungary in the 17th Century, paprika was prohibited and it's use and trade was punishable by death! This resulted in many people growing paprika illegally and a black market for paprika evolved, keeping the spice firmly entrenched in Hungarian cuisine. Interestingly, paprika can be used to tone down a dish if you have accidentally added too much chilli.

Sumac
If you haven't spent much time eating oodles of middle eastern food, then this is a spice which may have passed you by! Sumac is made from berries which grow on a tree in the Mediterranean and Middle East. Since there were no lemons in this region during the Roman era, sumac was used as a sour flavour in many dishes. Not only was it used for flavouring, but the berries were also used for dying as they are a rich deep red. Sumac was brought to Australia by middle eastern migrants, you may have encountered it sprinkled on hummus, fleshly sliced onions or used in salads such as fattoush. When buying sumac, the colour can be a good indication of the quality - darker red sumac contains more berry and less stem and seed than lighter varieties.

Reference: Hemphill, 2006
For my month of spices I'm using Spice Notes and Recipes by Ian Hemphill as my reference tool to learn about spices and for all the information above. Thanks Ian for writing such a great and informative book! 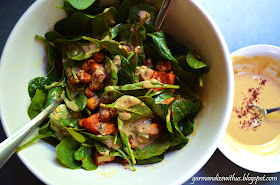 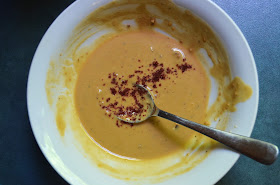 1. Heat the olive oil in a pan and add the chickpeas and spices. Fry, stirring occasionally until fragrant and the chickpeas are coated in the spices.
2. While they are cooking. Combine all the ingredients for the dressing (except the sumac) in a small bowl and mix well.
3. Remove the chickpeas from the heat and set aside while you put together the salad. Wash the baby spinach leaves and dry as much as you can. Place in a large serving bowl and sprinkle the chopped tomatoes over the top. Add the chickpeas and drizzle with the dressing. Sprinkle liberally with sumac.Toss just before serving. 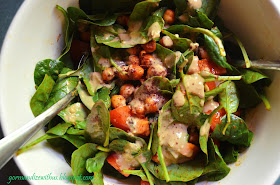