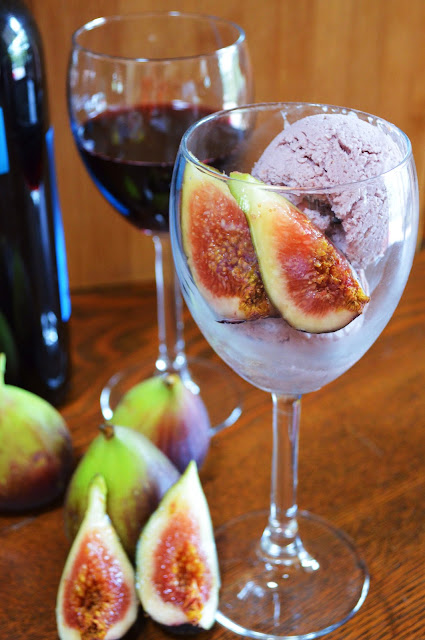 Over summer all my local greengrocers were stocking the most beautiful ripe figs for great prices. As soon as I saw these beautiful figs I instantly bought six. Then I got home and I couldn't decide what to do with them. It was tempting just to eat them all fresh in all their delicious fresh figgy goodness. But I have never made anything with figs so I decided that I wanted to use them in something. The first thing I thought of was The Kitchen Crusader's wonderful looking No Bake Fig and Chocolate Tart. But I'm trying to cook less rich and decadent desserts to be honest. I live with my partner and there are only so many rich desserts we can handle - so I thought I would make something which didn't have to be eaten all at once. My solution was fig and red wine ice cream (vegan, of course).

This is also my first time participating in the Eat-the-Alphabet link up blog hop - which I think it such a great idea. This month the letters E and F are being featured so I'm using Figs! For this recipe you'll need chilled coconut cream so be nice and organised and put the coconut cream in the fridge a few days before hand - I just keep a couple of tins in the fridge at all times so that I can pull them out and use it whenever I want.

On the subject of blog hops - I've decided that I should have one of my own since I have been participating in so many others' hops. Just trying to give a bit back into the community. It's open right now! The Vegan Soup-Off Challenge Blog Hop - don't be put off if you're not a vegan, it's open to everyone and vegetable/grain/pulse/noodle/pasta soups are for everyone - not just vegans. Please check it out and enter here.

On another note - I've been nominated for the Best Australian Blogs 2012 People's Choice Award - you can vote for me by hitting up this link: http://www.sydneywriterscentre.com.au/bloggingcomp/peopleschoice.html 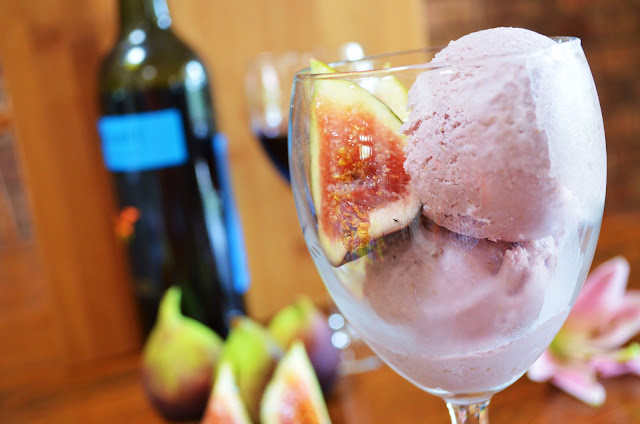 To Make
1. Place the cinnamon stick and the 1 cup of red wine in a small saucepan and bring to a gentle simmer. Simmer until the liquid has reduced by half to 1/2 cup. Remove the cinnamon stick and allow to cool.
2. Open the can of coconut cream and scoop out the solid cream on the top. Set the liquid parts down the bottom of the can to use in another dish (I usually add mine to curries or soups).
3. Place the coconut cream, simmered red wine, soy milk, tofu, extra tbsp red wine, vanilla extract and the fresh figs in a blender. Blend to combine (don't over blend).
4. Pour the ice cream into an ice cream maker and process according to the instructions that come with your maker. If you don't have an ice cream maker - like me :( - pour the ice cream into a wide chilled dish. Then remove from the freezer every half hour and mix well - breaking up the frozen edges. I use a whisk or a large metal spoon, just make sure you break up all the frozen bits so that large ice crystals don't form. Do this at least 6 times, the more the better! Then leave to freeze overnight.
5. Once the ice cream is firm you can serve. I recommend removing it from the freezer 5-10 minutes before serving so that it's easier to scoop. 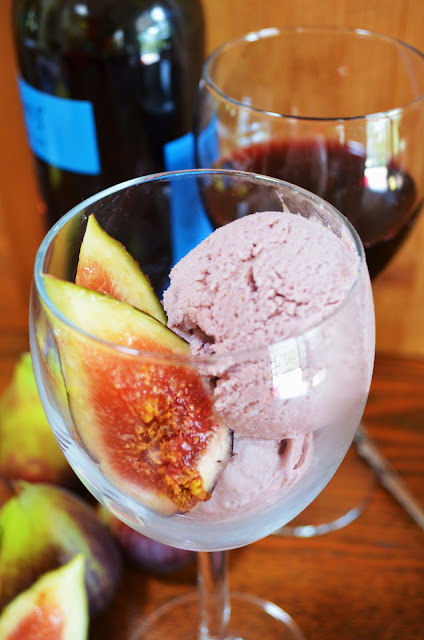 What is your favourite unusual ice cream flavour? 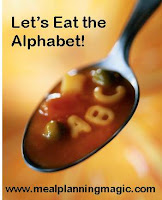