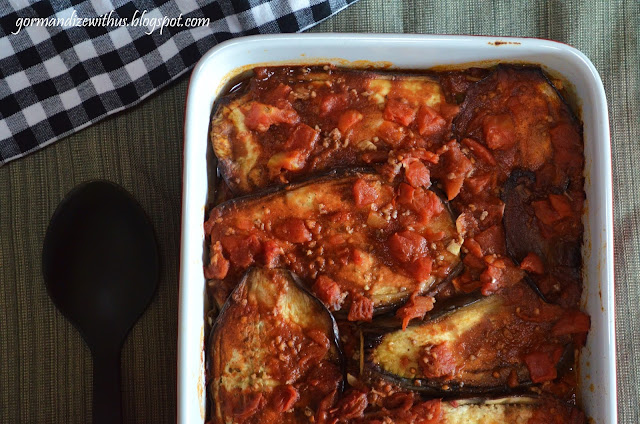 Had to take a couple of days break from Mofo blogging because I've been flat out at work, but I'm back to it now! My themes for this month are Egyptian food and 'My Spice Rack' and this delicious dish is part of both of those themes. This eggplant dish is called mesa'a'ah or sometimes spelled mesa'a'a or even just mesa'a - I don't know which one is most accurate because I'm just a chick with the internet. This dish uses allspice for flavour, a common ingredient in Egyptian and middle eastern dishes.

Allspice
Given it's confusing name, you would be forgiven for thinking that allspice was a spice blend. It is actually made from a dried unripe berry and is also sometimes referred to as 'Pimento' (which, confusingly, is the Spanish word for pepper). Allspice has a long history - the Aztecs added allspice and vanilla to their chocolate drinks and the Mayan Indians used it in embalming. It is also commonly used as an aid to preservation and even after the invention of refrigeration practices, it still appears in some preserved meats and in Scandinavian canned fish.It is also often used as a substitute for cloves, as it can achieve a much more subtle clove flavour. Allspice contains the same volatile oil (eugenol) as cloves and, surprisingly, as basil. Hence it is a spice which compliments tomatoes very well. 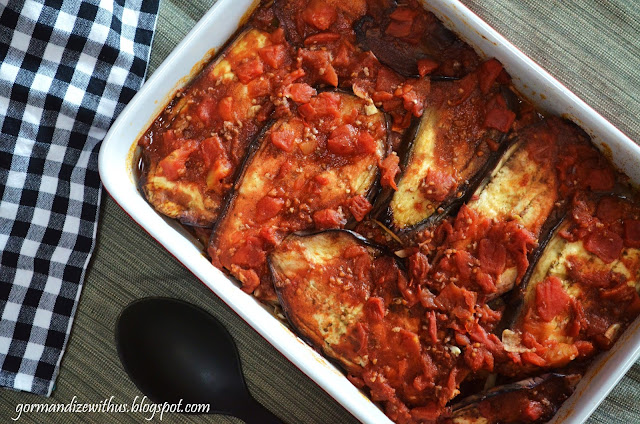 Ingredients
3 large eggplants
2 tbsp olive oil (you will need more if your pan is not non stick)
2 onions, thinly sliced
3 jalapeños (fresh or preserved), chopped (you can use less if you don't like it too hot)
2 x 400g tins chopped or crushed tomatoes
1 tbsp tomato paste
1/2 cup water
1 tsp allspice
Salt and pepper to taste

To Make
1. Preheat the oven to 180.
2. Slice the eggplant thickly. Heat the oil in a large frypan and fry the eggplant on both sides until just softened (doesn't need to be completely cooked). The eggplant soaks up the oil so you will have to replenish the oil between batches, if you use a non stick frypan you will use less oil.
3. Place about half the eggplant pieces in a layer along the bottom of a large lasagne dish. Top with the onions and jalapeños and then layer the remaining eggplant over the top.
4. Combine the tinned tomatoes, tomato paste, water, allspice and salt and pepper in a saucepan and bring to a simmer. Simmer gently for 5 minutes and then pour it all over the eggplant.
5. Cover the dish with foil and bake in the oven for about 45-50 minutes (or until the onion is cooked through).