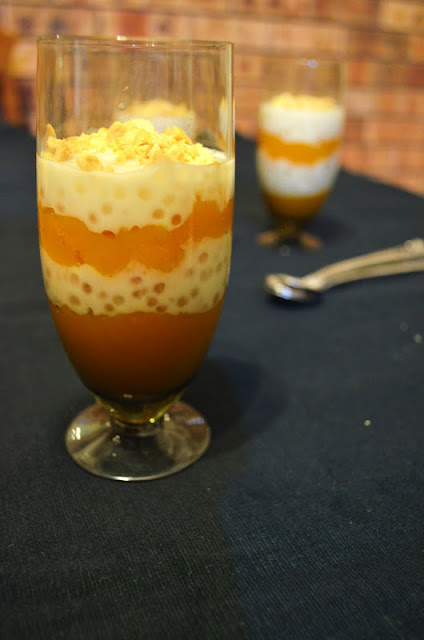 As with most Asian countries, Cambodia has a list of typical desserts which Westerners may deem "exotic". They pair things based on sweetness rather than classification. Whereas in the West we understand that basically vegetables and legumes go in savoury dishes and typically fruit is for sweet dishes. There are some obvious exceptions, such as carrot cake, pumpkin pie and duck al'orange, however, this rule is generally held true. In Asian cultures, however, these barriers don't exist. Fruit is freely added to savoury dishes and curries throughout Thailand, Cambodia, India and Sri Lanka. Whilst desserts use anything that has a sweet taste, including carrots, pumpkins, sweet potatoes, corn, cassava, taro, red beans (also called adzuki beans) and mung beans.

Mostly, as I've observed before, the main crossovers are orange vegetables. This is because orange vegetables are generally often sweet (carrot, pumpkin, sweet potato) whilst orange fruits are often naturally tart and sour (oranges, mandarines, tangerines etc). However, in Cambodia (as in other Asian countries) beans such as mung beans are also classified as sweets and used in desserts.

My Cambodian inspired dessert for you today is based on a recipe which involves mixing pumpkin, sweet potato, cassava and taro into sago. I've changed it up a bit by simplifying it and serving it parfait style - in layers! It's a very easy dessert and quite healthy (except for the sugar) and makes a nice change from the same old desserts we're used to serving up to guests.

To Make:
1. Cover the pumpkin and sweet potato with water and bring to a simmer. Simmer, covered for about 30-40 minutes, or until very soft.
2. Bring the coconut milk, water, (vanilla bean), and sugar to a simmer in a different saucepan. Add the sago and simmer over a very low heat, partly covered for about 30 minutes. Stir frequently to make sure it isn't sticking to the bottom too much (it probably will a little bit anyway). After 30 minutes remove from heat, stir through the vanilla extract and allow to cool.
3. Strain the pumpkin and sweet potato, reserving the water. Add back 1-2 tbsp of the reserved water and then either mash or puree in a food processor until smooth (I was able to just mash mine pretty smooth because they were quite over cooked, which is what you want!).
4. Pass the purée through a sieve to make it extra smooth and smash out any remaining lumps (this is optional, it just makes sure that your purée is nice and smooth and even consistency). Stir the vanilla extract and cinnamon through and allow to cool completely.
5. Start with a layer of the purée in the bottom of your parfait glasses (using about half the purée across six parfait glasses). Follow with a layer of the sago (once again, using about half the sago) and then the remaining purée and sago in layers. Top with chopped peanuts and serve.