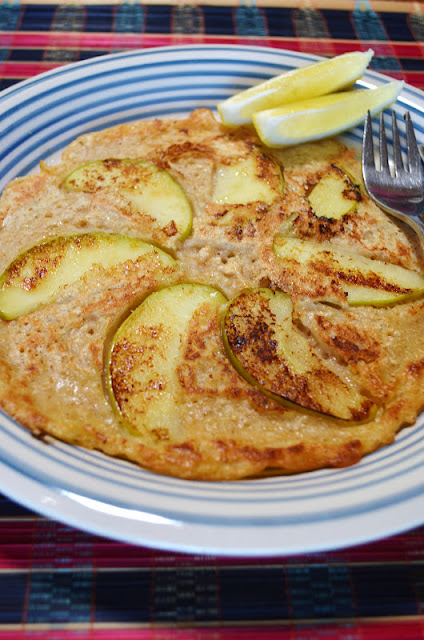 Guten Tag! I'm very, very happy to tell you that October will be German Food month on Gormandize with A-dizzle & K-bobo! Are you excited? I sure am! All of October (or should I say Oktober?) there will be vegan recipes for tasty German treats being posted as I try out my hand at some German food. Guess what? I've already made a start and have chopped up some cabbage which is fermenting now to give me some lovely (I hope!) sauerkraut. I'll definitely report back on how this goes later in the month. Thanks to reader Zane who requested Germany, if you'd like to request a country to be featured then jump here and do so.

But I'm starting us off with something nice and easy. Pfannkuchen (pancakes) are not traditionally eaten for breakfast in Germany, but are considered more of a sweet or dessert. I however, being in Australia, made these for breakfast. Not because I was snubbing a German custom, but because I really felt like eating these for breakfast this morning. I made a variation on traditional German pancakes, which are usually made without the apple and are served with apple sauce, jam or canned fruit. These apple pancakes use thinly sliced pieces of apple cooked into the pancake which was a lovely variation in texture and flavour to the pancakes. I'm sold on the idea, as it is nice to have pancakes which aren't exactly the same with every bite. I think I will start putting fruit in my pancakes more often now! 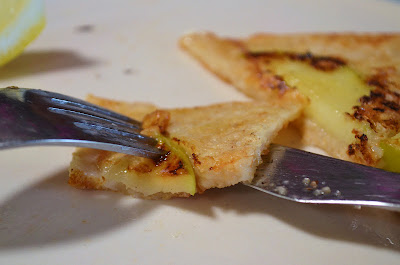 German Apple Pancakes
Adapted from Seitan is my Motor

To Make
1. Combine the flours, baking powder, sugar, cinnamon and salt in a bowl and mix well. Add the soy milk and mix through to form a thick and stick batter.
2. Thinly slice the apples and place in a bowl with the lemon juice.
3. Get everything ready and at hand to cook (frypan, ladle, spatula, margarine, apple slices).
4. Add the soda water to the pancake batter and mix through, it should make quite a thin and runny batter. There may be some lumps, but don't worry about those.
5. Heat 1 tbsp margarine in the frypan at a medium heat. Add about 2 ladles of batter to the pan. Place the thin slices of apple on top of the batter in the pan. 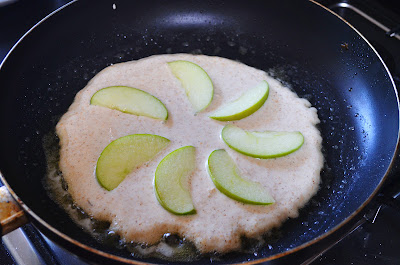 6. Cook over a medium to low heat until the edges look crispy and bubbles appear in the pancake. Carefully flip over and cook on the other side. You want to cook them for a bit longer than you would cook regular pancakes, as you want the apple to be tender, so do it on a slightly lower heat than you would normally cook pancakes.
7. After 4-5 mins cooking the apple side, flip it back the other way and serve. I recommend serving with margarine, sugar and lemon juice.
8. Continue with the remaining batter and apples, adding 1 tbsp margarine to the pan before cooking each pancake. 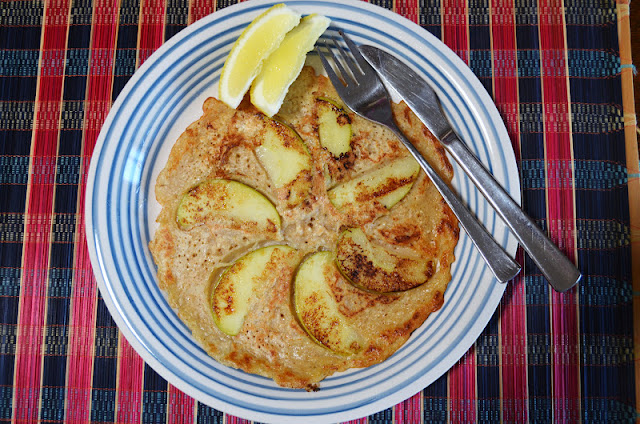