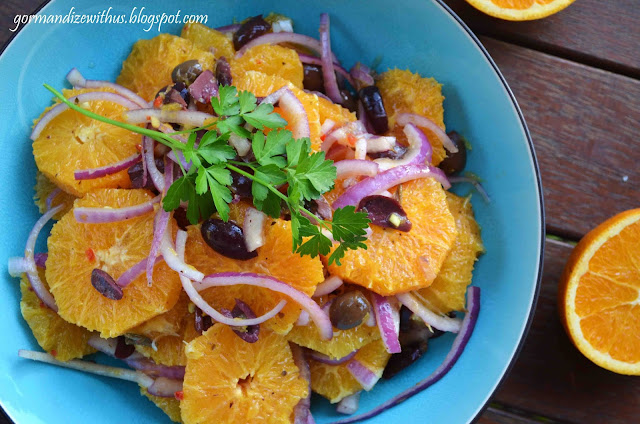 I love trying new salads, and with spring well and truly here now it's the perfect time to be experimenting with them. I found this beautiful salad on (shifty eyes) wikirecipes. I know, it's not the most reliable source of information. But it was listed with the Egyptian recipes and even though I really wasn't sure if it was authentic at all, I thought it sounded delicious so I decided to make it  anyway - maybe an Egyptian reader can tell me whether it is the kind of thing that Egyptians would actually eat :)

In the end though, it didn't matter if it was authentic or not because it was really, really tasty and I will definitely make this again. It is a fresh and light salad which makes a perfect accompaniment to heavier, carby-er main dishes.

This Orange & Olive Salad is flavoured with ground cumin - which is not an exotic spice but it's not something I normally put in salads in ground form (I often do use toasted cumin seeds in salads which is delicious!), so it was nice to learn a new use for this incredible spice.

Cumin
Cumin is a cooks best friend, it has amazing flavour and enhances any curries, soups, casseroles and salads you could dream to put them in. It is believed to be indingenous to the middle east and has a strong history in Egypt.  Cumin seeds have been found in the pyramids of the pharoahs, they were used by Egyptians in their mummifying process. There is also references in the Old and New Testaments of the bible to cumin. In ancient Rome, cumin was a symbol of greed and the miserly emperor Marcus Aurelius was nicknamed "Cuminus". 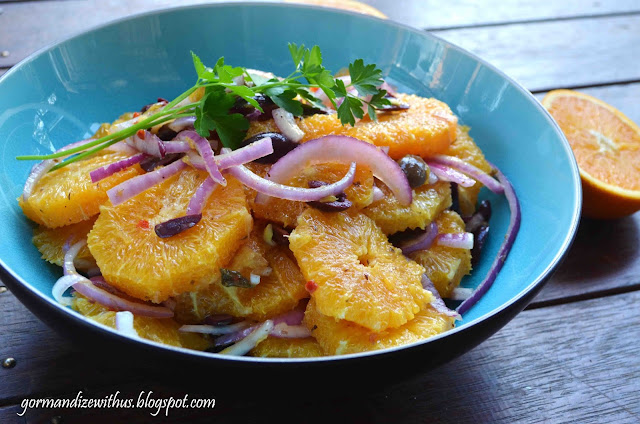 Orange and Olive Salad with Cumin

To Make
1. Combine the orange slices, olives and onion in a salad bowl.
2. Mix the lemon juice, cumin, olive oil, salt and pepper in a jar and shake well.
3. Pour the dressing over the salad and allow to sit for 20 minutes to let the flavour meld. Serve at room temperature. 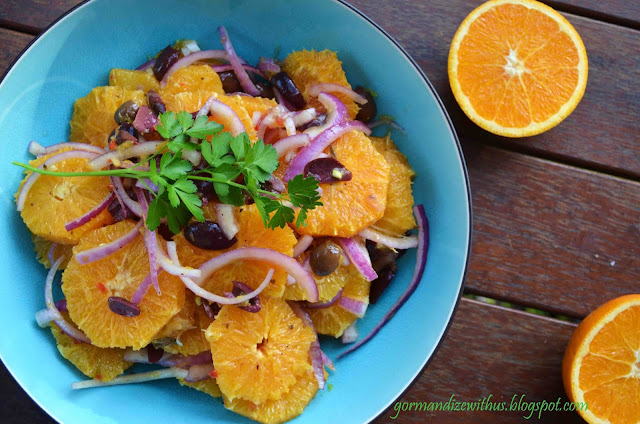