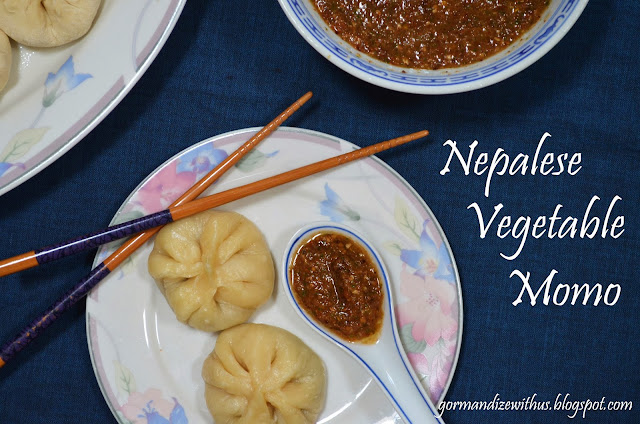 Nepalese Food Month has been a bit sporadic this month, but I've still got plenty of recipes to share with you - so you might be seeing quite a few go up between now and the end of the month. The good news is that the dreadful weather they were predicting for the fires has been milder than they expected. The temperatures have been moderate and today there is no wind at all. It's a relief, even though the fires are still burning and the fire fighters are working hard!

It leaves me a little more time for posting, though, so I'm bringing you a special recipe today. People who have spent time in South China or Tibet may have heard of Momo - steamed buns/dumplings filled with vegetables or meat. This recipe is a great example of Nepalese food - it's that mixture of Chinese and Indian influences. These very Chinese style steamed dumplings are filled with a very non Chinese filling of curried vegetables and then dipped in a delicious Sichuan style chilli sesame sauce. It's fantastic fusion, and honestly I've never eaten anything like it before. It's like a dumpling meets a samosa and they fall in love and have babies - momo babies. 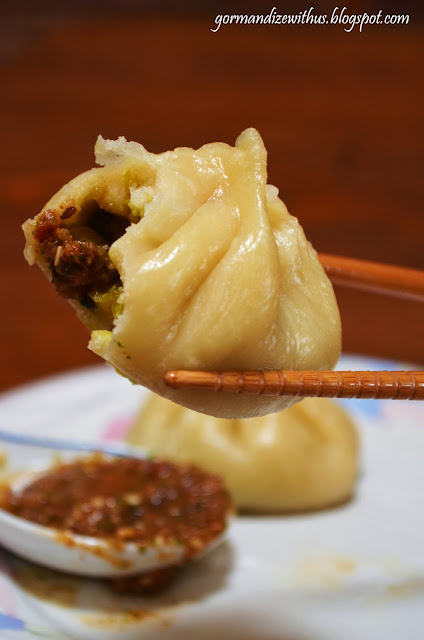 To Make
1. Start with the filling - heat the oil in a large frypan and add the onion, garlic and ginger. Once the onions are softened and translucent add the fenugreek seeds and mustard seeds and fry for a further 15 seconds or so until they are golden brown.
2. Add the garam masala and turmeric and fry for another 30 seconds, until the spices are fragrant. Then add the vegetables and water and bring to a simmer. Simmer gently until the vegetables are cooked through. If all the water cooks off before the vegetables are cooked, just add more.
3. Once the vegetables are cooked, add another 1/4 cup water and bring back to a simmer. Add the tbsp flour and the fresh coriander and stir until the mixture is thick and no liquid remains. Set the filling aside to cool.
4. While the filling is cooling make the dumpling dough and the dipping sauce.
5. To make the dough - combine the flour and salt in a large bowl. Add the oil and a bit of water and start to mix with your hands. Add just enough water so that a dough forms, it should be enough water that all the flour sticks together in a ball, but not so much that the ball of dough sticks to your fingers when you knead it. If you've added too much water and it's too sticky, just add a bit more flour until you get the right consistency.
6. Turn the dough out onto a floured surface and knead it for 10 minutes (set the timer on your oven, to make sure you don't under estimate the time). Return to the bowl and cover, let it stand for at least 20 minutes. While it is resting you can make the dipping sauce (recipe below).
7. Once the filling is completely cool, it's time to make the dumplings. Flour a work bench and pull off walnut sized pieces of dough. Roll into a ball and then roll out with a rolling pin to form a circle about 3-4 inches in diameter. Place a tablespoon of vegetable filling in the centre of the circle.
8. Grab the four "sides" of the circle and bring them together in the middle, pinch together so they hold. You'll now have four "loops" of dough sticking out each side, fold the each of these loops in on themselves towards the centre to form a pleat. Pinch the top together well so that they don't split open during steaming. (NOTE - this is how I did it, but use any method you like to make little pleats in the dumplings as you fold them up).
9. Once each dumpling is made, place it straight into a lightly oiled bamboo steamer (I placed mine straight onto the lightly oiled serving plate and then steamed them in my wok). Repeat with the remaining dough and filling (makes 23-25 dumplings).
10. Just before serving, steam the dumplings for 10 minutes and serve hot with the chilli sesame dipping sauce. 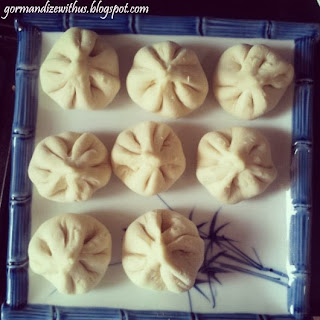 To Make
1. Heat a dry non stick frypan or wok over a medium heat. Add the sesame seeds and toast for about 1 minute, stirring often, until lightly browned. Remove from pan and set aside.
2. In the same dry pan, place the dried red chillis and the whole tomatoes and heat for about 2-3 minutes, turning ever so often to ensure even roasting. Remove from the pan and set aside with the sesame seeds.
3. Combine the sesame seeds, chillis, tomatoes, crushed garlic, coriander and water in a food processor and blend for a minute into a sauce. 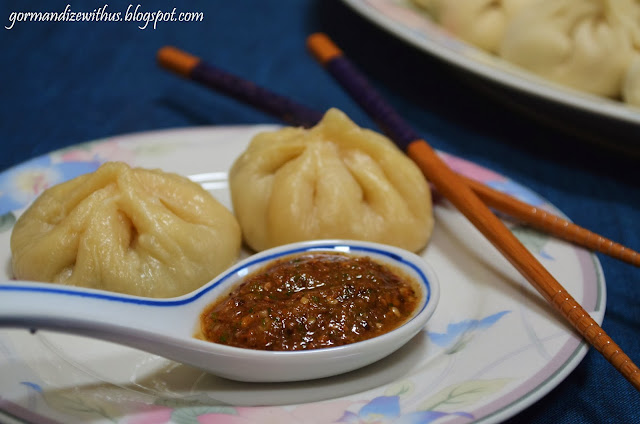