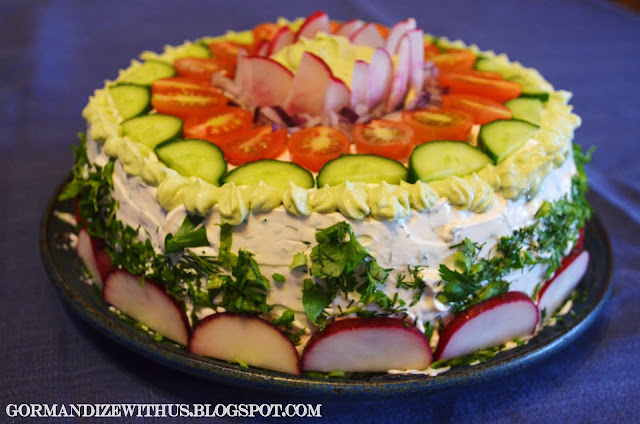 August is Swedish cuisine month here at Gormandize, which is proving to be a delicious exploration for me! You may remember back a couple of months ago when I invented Cake Sandwiches and very excitedly shared them with you! Well, now here is the opposite - a Sandwich Cake! I most certainly can't claim to have invented this one though, it is a traditional Swedish dish called Smörgåstårta.

Smörgåstårta is commonly made in Sweden with salad and seafood ingredients, lots of cream cheese and mayonnaise as the icing/frosting. Typically they are decorated extravagantly with smoked salmon, cocktail prawns, boiled eggs and a variety of salad ingredients (you can check out a whole variety of ones here). These are not the most vegan friendly ingredients, however, the great thing about smörgåstårta is that it's really up to you what you want to put in or on it - just like a sandwich! 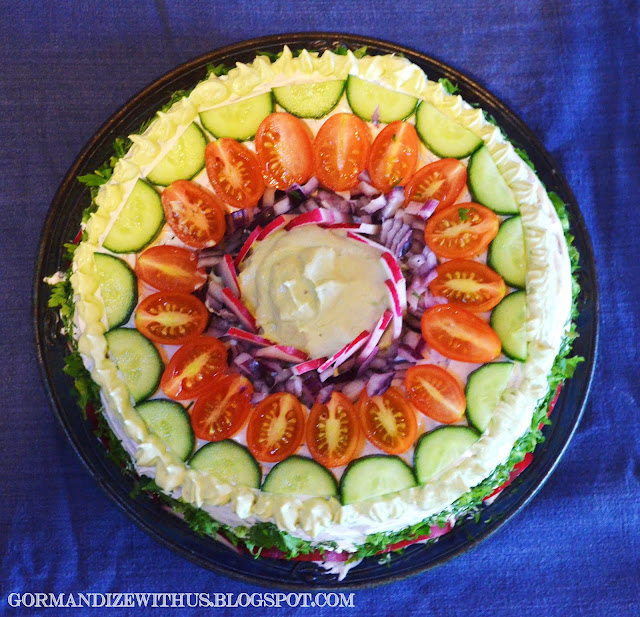 In Sweden, where this dish is made very often, I understand that you can buy round pieces of bread to use just for this purpose. However, this is not commonly available in Australia, so I was faced with a bit of a bread issue. I had seen several smörgåstårta online which were made with a loaf of bread in a log shape, they looked pretty good - but it just wasn't the same. I knew that I definitely wanted my smörgåstårta round like a proper cake and carved into big wedges to eat!

So, I came to the conclusion that I'd have to make my own bread for it, so that it could be the shape that I wanted. It sounds like a lot of effort - but actually it wasn't. Just cook your bread in a springform cake tin and you will end up with cake-shaped bread which is easy to work with and has the extra deliciousness of being freshly baked bread! I used the bread recipe from this smörgåstårta on saveur.com and it worked out perfectly. 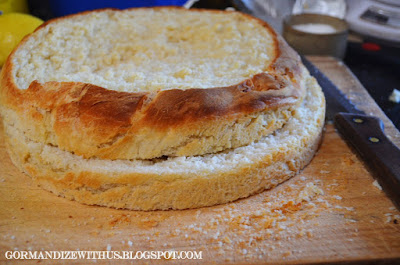 In terms of fillings, you can really do whatever you like. So incorporate your favourite sandwich filling, it's easy! I stayed with a fairly "traditional" filling of cream cheese, cucumber, avocado and lettuce. But when it comes to topping it off, I recommend using the most colourful things you can find! I used parsley, radishes, avocado, cucumber, grape tomatoes and spanish onion. But lots of other things would work great and look super colourful - including olives, grated carrot, roasted pumpkin, yellow tomatoes, corn - and anything else you can think of, just have fun with it, because I can testify that it is a lot of fun!

Bread:
1. Dissolve the yeast in the warm water. Add the agave nectar, salt and oil and stir well.
2. Add the flour and mix well with a wooden spoon. Once the dough becomes too thick, use your hands to knead the remaining flour in until the dough has enough flour so that it doesn't stick to your fingers, but don't add too much.
3. Cover the dough in the mixing bowl well (I just use a tea towel) and place in a warm spot to rise for 45 minutes (please read my post here on the fabled 'warm spot' in which dough rises!).
4. Remove the dough and knead briefly. Lightly grease a 23cm springform cakepan and line the bottom with greaseproof paper. Place the dough in the pan and press out flat over the bottom.
5. Cover again and let rise for another 45 minutes.
6. Preheat the oven to 200C and bake the bread for 30-35 minutes. You may want to switch your oven to the "bottom only" setting for the last 5 minutes to ensure it cooks on the bottom evenly.
7. Allow to cool. Once cool trim off the crusty top and and crusty edges and slice the bread into three even layers.

Second Layer
1. Cream the avocado and sour cream together and season to taste with salt and pepper. Try to make it as smooth as possible, you may like to do this in a blender or food processor to make it completely smooth.

Cream Cheese "Icing"
1. Cream the vegan cream cheese, sour cream, dill and salt until smooth. Use electric beaters and lift then up and down through the mix as you beat to try aerate the mixture as much as possible.

Assembly
1. Place the bottom layer of bread on the plate you're going to serve it on (trust me, you don't want to have to try and move it after you have assembled and decorated it).
2. Spread the herb and garlic cream cheese over it and then layer with sliced cucumber. 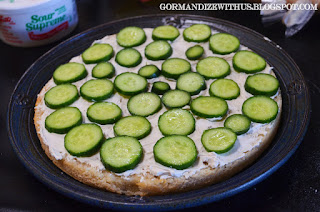 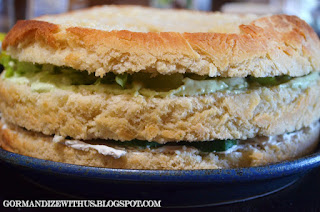 5. Cover the whole thing with the vegan cream cheese "icing" as if you were frosting a cake - all over the sides and the top.
6. Put the remaining avocado mixture in a piping bag with a star nozzle and pipe it around the edges, or whatever you like.
7. Decorate however you like!

Makes 1 big cake, serves about 8 people. Perfect as part of a buffet, potluck or smorgasboard!