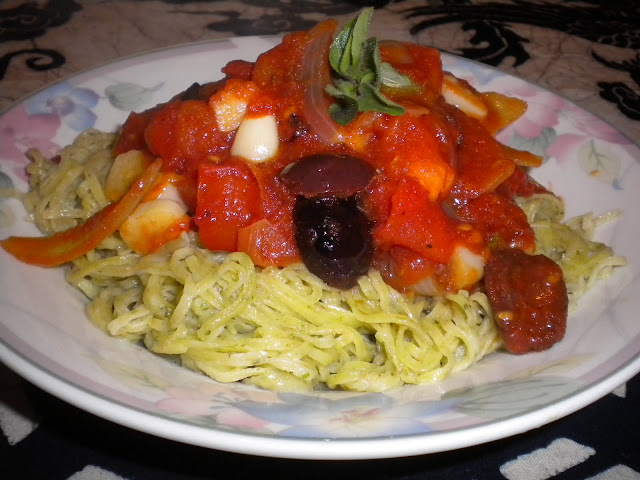 Ok - so I know most people think that making your own spaghetti is just too hard, and truthfully I used to be one of them. But I recently discovered the other day that it is ridiculously easy! Home made fresh pasta has such a great delicate flavour and means that you can get creative with the pasta. Once you can make your own gourmet pastas you can make the pasta the star of the dish and complement it with a nice simple sauce. So go and borrow somebody's pasta rolling machine and give this a try - once you realise how easy and delicious it is you'll go and buy one of your own :) This spaghetti is fine to eat the same day but the longer you dry it the better it will hold together when you cook it - so overnight is ideal!
On the other hand - if you don't feel like making your own spaghetti then you can substitute some spinach fettuccine or other special store bought pasta.
Ingredients:
Basil Spaghetti
1 1/2 cups fine semolina
1/2 cup wholemeal flour
1-2 tbsp olive oil
2/3 cup water
1 loosely packed cup fresh basil leaves
Roasted Tomato Garlic Sauce
6-7 fresh tomatoes
3 cloves garlic
1 onion
1 tbsp olive oil
1 tbsp tomato paste
1 tbsp soy sauce
1 tsp raw sugar
8-10 pitted kalamata olives
3 tbsp chopped oregano
To Make:
1. Preheat the oven to approximately 180 degrees Celsius.
The Pasta
1. Shred the basil in a food processor. Add the semolina and flour and process briefly to combine. With the food processor still on gradually add the water and olive oil. The mix will begin to look like breadcrumbs and then as it mixes will turn into a thick dough.
2. Dust the a workspace with some flour and turn the mix out onto the flour. Knead very briefly to add a bit more flour to the mix, if the dough is too sticky add some more flour.
3. Cut the mix into 8 equal portions and put through your pasta roller according to it's instructions. You will probably find you need an extra set of hands to help.
4. As you roll out the spaghetti lay them flat carefully on a piece of greaseproof paper (try not to make the strands too long - try for about the length you would get in a packet of ready made spaghetti) and leave to dry. I would advise that you leave it for a minimum of half an hour but I actually recommend several hours. The best would be overnight, the longer you leave it to dry the more the pasta will stick together when you cook it. I dried my first batch for 30 minutes and it broke up into short lengths when I cooked it, then I dried my second batch for 5 hours or so and it stayed together beautifully.
The Sauce
1. Chop the tomatoes in half and then chop each half into 4-6 pieces. Slice the onion into thin wedges and peel and roughly chop the garlic.
2. Drizzle a baking dish with olive oil and add the tomato, onion and garlic. Stir well to coat with oil. Put in the oven and bake for 20-25 minutes, or until the onion is cooked and the garlic has softened.
3. Stir in all the remaining ingredients and return to the oven for about 5 minutes while you make the pasta.
And then..
1. Bring a large pot of water to the boil. Once the water is boiling add your basil spaghetti to the boiling water and stir gently to prevent sticking. Fresh pasta doesn't take long to cook and your spaghetti should be cooked after about 1 or 2 minutes of boiling. Drain.
2. Serve topped with the Baked Tomato Garlic Sauce!
Posted by Keely at 21:10 1 comment:

Lentils with Artichoke and Mint 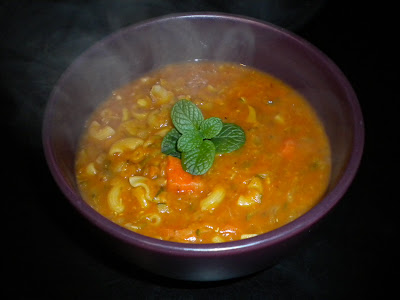 Ingredients:
1 onion, chopped
3 cloves garlic, chopped roughly
2 zucchinis
1 cup red lentils
6 cups vegetable stock
1 large carrot, diced
1 tbsp soy sauce
4 whole un-marinated artichoke hearts
1 cup very small macaroni (or other small soup pasta)
Half a bunch of mint, chopped finely
To Make:
1. Heat some olive oil in a large saucepan or soup pot, add the onion, garlic and ¼ cup of chopped mint. Sauté until the onion is soft. Coarsely grate the zucchini and add to the pot. Cook gently for 1-2 minutes.
2. Add the lentils, vegetable stock, carrot and soy sauce. Bring to the boil and then reduce the heat and simmer gently, covered for 20 minutes, or until the lentils are soft.
3. Chop the artichoke hearts roughly into eighths and add to the pot with the soup pasta and the rest of the mint. Simmer with the lid off for 5-6 minutes until the pasta is cooked. Season to taste with pepper and serve with a sprig of mint as garnish.
Posted by Keely at 12:58 2 comments: 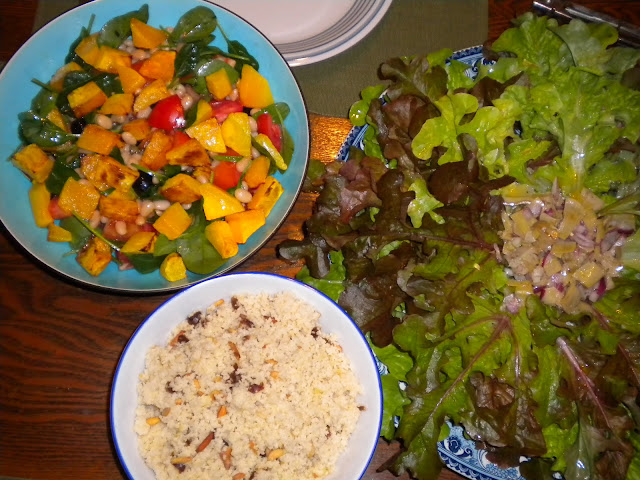 To Make:
Boil cover the beans in water and boil in a saucepan with the lid on for 1-2 hours (until beans are cooked to the way you like them, their skins should be slightly split but the bean still firm). Chop the pumpkin into cubes, coat in olive oil and roast for 10-15 minutes in the oven until cooked.
Combine all ingredients in a bowl and drizzle with some of the oil that you cooked the pumpkin in.

To Make:
1. Chop artichoke hearts in eighths and dice the onion very small. Combine the artichoke, onion, lemon juice, olive oil and crushed garlic. Leave aside to marinate while you make the other 2 salads.
2. Just before serving break the lettuce into leaves and arrange on a big serving platter alternating the colours. 3. Spoon the artichoke mix into the centre of the plate and drizzle the dressing at the bottle of the bowl over the lettuce leaves.

To Make:
1. Preheat an oven or grill to 180 degrees.
2. Put the dry couscous in a bowl and cover with the boiling hot vegetable stock, leave to soak until the couscous is fully expanded and there is no more liquid in the bowl. Fluff the couscous with a fork and mix the dates through.
3. Spread the almond slivers on a tray and toast for 2-3 minutes until slightly browned – keep a close eye on the suckers because they are really easy to burn. Once toasted mix through the couscous mix. Serve.

Note: this couscous also goes great as an accompaniment to curry or roast vegies. To add a bit of colour to it you can also add a handful of chopped coriander.
Posted by Keely at 21:00 No comments: 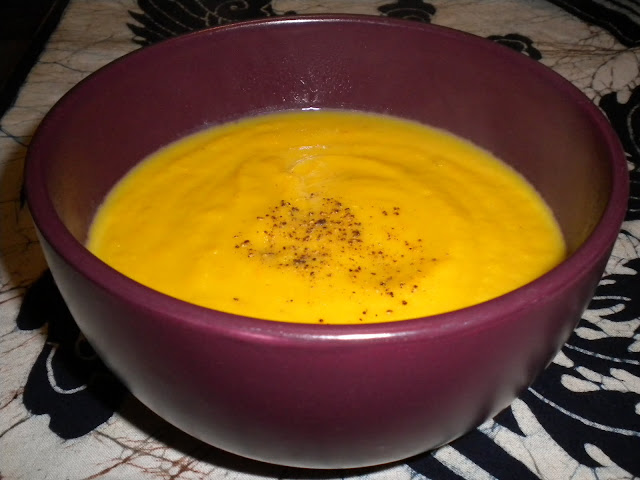 This one has a bit of a difference with the addition of the garlic right at the end so that the garlicy flavour really comes out.

To Make:
1. Heat some olive oil in a soup pot and saute the onion, leek and one of the garlic cloves until soft and transparent.
2. Add the vegetable stock, vegetables and spices and bring to the boil. Simmer gently for 20 minutes or until all the vegies are well cooked (this will vary depending on how big you chopped your vegies).
3. When the vegies are cooked transfer the soup to a blender with the remaining clove of raw garlic and purée in batches. Add back to the rinsed soup pot and heat gently.
4. Stir through the soy sauce and lemon juice.
5. Eat! (Tastes great with fresh bread rolls!) 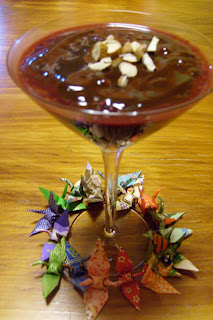 Why temporary? Because the combination of chocolate brownies, berry compote and chocolate-coconut ganache in trifle form is almost certain to disappear as soon as it's created.


Chocolate brownie ingredients:
1 cup of soymilk
1 tsp of apple cider vinegar
1/4 cup of rice bran or canola oil
1 1/4 cups of sugar
1 tsp of vanilla extract
1/4 cup of dark chocolate, chopped and ready to melt
2 cups of plain flour (you can replace this with gluten free flour if you wish)
3/4 cup of cocoa powder
1 tsp of baking powder
1/2 tsp of salt


Berry compote ingredients:
400gm of fresh or frozen berries of your choice (I used mixed)
2 Tbsp of raw sugar


1. Preheat oven to 180 degrees (c)
2. In a large bowl, whisk the soymilk and apple cider vinegar and let stand for a few minutes.
3. Melt the chocolate (boil water in a saucepan, place the chocolate in a bowl and place the bowl in the saucepan, making sure no water enters the bowl. Whick chocolate until it is melted.
4. Add the sugar, oil, vanilla extract and salt to the soymilk mixture and whisk.
5. Add the dry ingredients and stir until combined.
6. Stir the melted chocolate through the mixture.
7. Line a 33x23cm baking tray with baking paper, pour the brownie mixture in and bake for 30mins.

Berry compote:
1. Put the berries into a small saucepan over a low heat, sprinkle with the sugar and cook until they have released their juices. The mixture should look like a lumpy jam (in a good way...). This should take no longer than 10minutes.

Chocolate-coconut ganache:
1.Heat the coconut milk in a small saucepan until just boiling, take off the stove and whisk in the chocolate until all melted.

Trifle assembly:
1. Find/buy/steal 4 martini glasses.
2. Fill 1/4 of the glasses with the berry compote
3. After cutting the brownies into squares, place one in the glasses.
4. Cover brownie with ganache.
5. Add another brownie
6. Cover with compote.
7. Add a layer of ganache and top with some sliced almonds. Refrigerate for an hour.