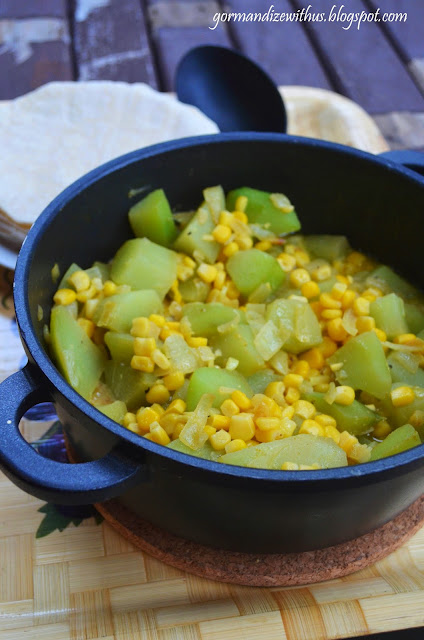 Things I Can't Get Near Me:
Plantains (sob!)

I also kept finding recipes online which called for chayote. Not knowing what a chayote was, I put it down on the list and discarded all the recipes. Then, in a stroke of genius which rarely occurs - I thought I might just google chayote to see what it was. To my surprise I discovered that I was actually familiar with it - I just know it by a different name: Choko. You know, these fellas:

I've eaten choko since I was a kid and I've always really liked it, although I know that not everybody is as keen! Infact I've heard rumours that McDonald's Apple Pies used to (or still do?) contain quite a lot of choko because the flesh holds it's shape well, has a mild taste and looks pretty similar to apple when cooked. I don't know if that is true, but it sounds pretty plausible to me.

It turns out that chokoes go by many different names. You might also have heard them called Christophenes. In fact according to wikipedia (get your grain of salt ready) it's also known as:

You certainly learn something every day! So, once I realised that chayotes were actually chokoes and that I could get my hands on them, chayote was back on the menu! I started searching around for a good choko recipe from Costa Rica and ended up being emailed one by an awesome Costa Rican named Kimberly who out of the goodness of her heart took the time to type it all up for a complete stranger. Sometimes the internet reminds you that the world is a wonderful place (even though a lot of the time it reminds you that the world is full of horrible and cruel people). 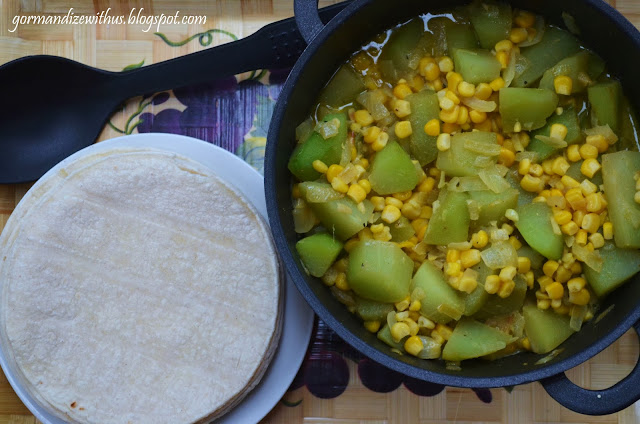 I changed the recipe very little from the one she sent me. At first glance it looks too simple to be interesting but all I can tell you is that this dish is special. It's so creamy and flavourful that it's impossibly just to eat a little bit, I find myself going back for more and more. Next time I buy chokoes I am definitely going to be making this again with them! Serve with corn tortillas (like everything else in Costa Rica) and chopped coriander to garnish.

To Make
1. Peel the choko and chop into cubes (NOTE: it is a good idea to use gloves when peeling and cutting choko, as it's juices irritate the skin and leave you with a very unpleasant dry and tight feeling on your hands).
2. Heat the olive oil in a pan and add the onions and garlic, sauté until soft.
3. Add the chopped choko, cumin, corainder, salt and pepper and cover with a lid. Cook over a medium heat for about 10 minutes.
4. Add the corn, rice milk and sugar. Cook, uncovered, until the choko is cooked (it should be tender to pierce but still firm enough to hold it's shape) and the milk has cooked down by about half. Stir well and serve.

Serves 4 with tortillas (and any other accompaniments). 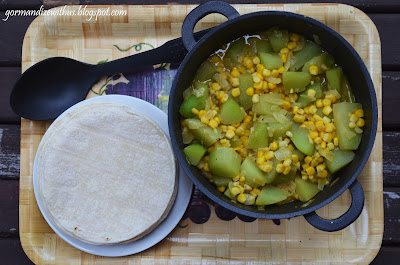