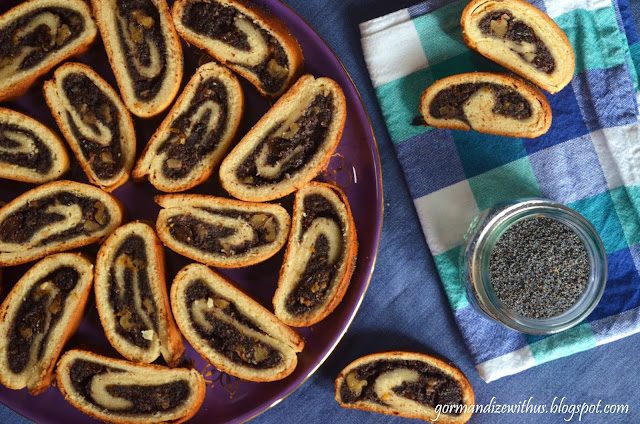 I made this delicious poppyseed strudel during Polish food month (July 2013) but didn't get time to post it, so I'm bringing it out for Vegan Mofo and my Spice Rack theme. Poppy seeds are possibly not actually a spice (although I guess that depends on your definition) but they're kept with my spices so I'm including them in the list.

Poppy Seeds
Two varieties of poppy seeds are commonly consumed - white and blue poppy seeds. Blue poppy seeds are most commonly seen in European/Western cuisines - they're the ones you'll find sprinkled on bread rolls, pastries and in your orange and poppyseed cake. White poppy seeds have a slightly milder flavour but otherwise are fairly interchangeable - they're more commonly found in Indian, Asian and Middle Eastern dishes. Both types of poppy seeds are gathered from the same poppy that produces opium, however the ones used in cooking have virtually no narcotic content (just 50 ppm). Poppy seeds contain a relatively high amount of oils, so can easily become rancid if they are old or stored improperly. Try to buy small quantities of poppy seeds (only as much as you need) from shops which have a high turnover and store any remaining ones in an airtight container. 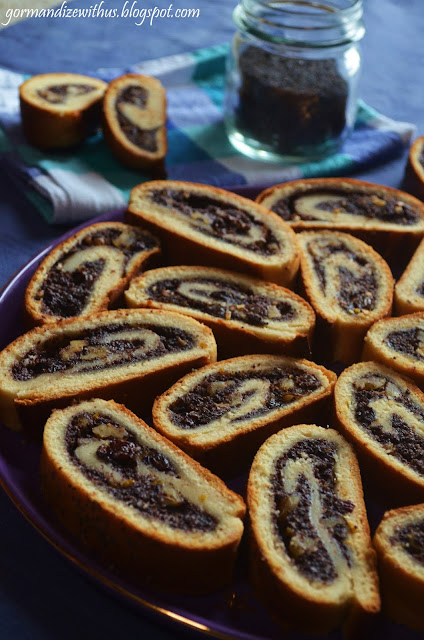 To Make
1. Cover the poppy seeds in hot water and soak over night. Then drain and grind in a food processor.
2. Whisk together the warm soy milk and the dry yeast and set aside for 10 minutes, until foamy (if this does not foam up, your yeast may no longer be active and you may need to buy some fresh stuff).
3. Add the 1/4 cup sugar, oil, salt and apple sauce to the yeast mixture and mix well to combine.
4. Add the flour and mix until a dough forms. Turn dough out onto a floured surface and knead for 6 minutes by which time you should have a smooth ball of dough. Return to the bowl and cover with a tea towel. Let sit in a warm spot for 1 1/2 hours to rise.
5. To make the filling: combine the soy milk, margarine, sugar, ground poppy seeds, orange zest and raisins in a saucepan and place over a medium heat.  Cook until thickened, stirring frequently. After about 4-5 minutes it should be quite thick, remove from the hear and stir the vanilla extract through.
6. Heat the oven to 180 degrees.
7. Turn the dough out onto a floured surface and roll out into a big rectangle. Spread the filling over the rectangle of dough, leaving about 1 1/2 cm around the edge. Sprinkle the walnuts on top. 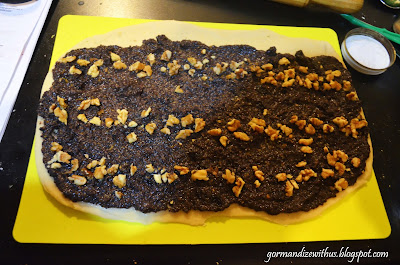 8. Roll up into one big log (starting from the longer side of the rectangle) and place seam side down on a baking tray lined with baking paper. Brush the top with milk and sprinkle with poppy seeds.
9. Bake for 20 minutes, or until golden brown on top. Allow to cool, then slice and serve. 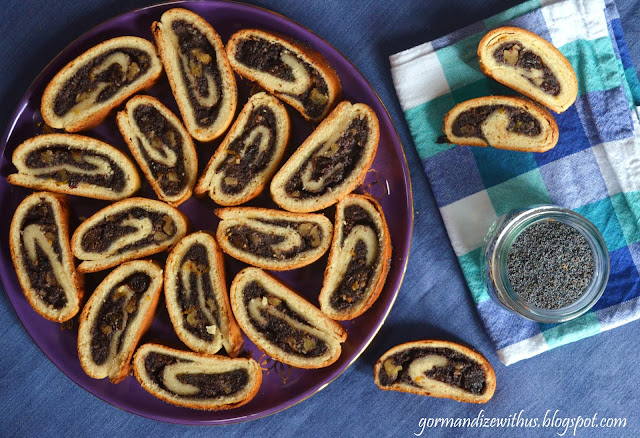 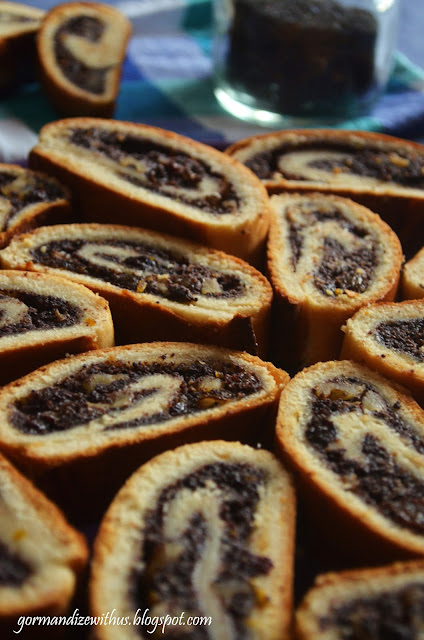