How to Make Your Own Preserved Lemons (Egyptian Style) 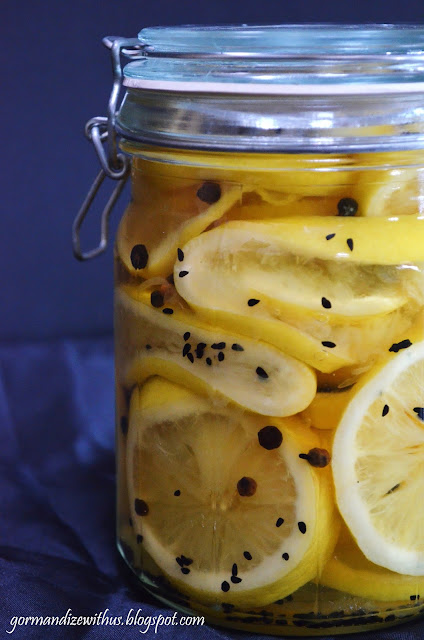 It isn't difficult and the result was delicious. Commonly in Egypt lemons are preserved in brine with things like nigella seeds and safflower to flavour. I didn't have any safflower in the house sadly (I've substituted peppercorns) but I did have some nigella seeds and conveniently this month I am doing Vegan Mofo with the theme "My Spice Rack" in which I try to use up lots of the spices which I rarely use. Nigella seeds are definitely something I'm keen to find more uses for - I've got a big jar of them but I'm not really sure what to do with them. Does anyone have any other ideas?

Nigella Seeds
Nigella seeds (Nigella satvia), also sometimes referred to (incorrectly) as Black Cumin (Carum bulbocastanum), is native Western Asia and Southern Europe. According to online sources Nigella satvia has been used in Traditional Chinese Herbal Medicine and in Aryuvedic medicine. That's somewhat my area so I pulled down my Materia Medica and had a look. Nigella satvia doesn't appear in my Materia Medica of Chinese Herbal Medicine so I cannot vouch for the claim that it was used in TCM. It may, however, have been used in Ayurvedic medicine (not my area!). Most commonly, nigella seeds can be found sprinkled on top of Turkish bread and some naan breads. The spice compliments carbohydrates particularly well and so if often used on bread or in potato dishes.

Reference: Hemphill, 2006
For my month of spices I'm using Spice Notes and Recipes by Ian Hemphill as my reference tool to learn about spices and for all the information above. Thanks Ian for writing such a great and informative book!

To Make
1. Dissolve the salt in the cup of boiling water and then set aside to cool. Crack open some of the peppercorns using the side of a knife or a mortar and pestle (but don't crush them up).
2. Scrub the lemons and slice either in 1 cm thick slices or you can cut them into quarters or eighths, whatever you like. Place the lemons in a saucepan and cover with water.
3. Place over a low heat until the water is not quite boiling yet. This will soften the lemons up but not cook them (don't let the water come to a simmer). Remove from the water immediately so they don't continue cooking (but keep the water).
4. Grab a sealable jar and wash well with hot water. Place the lemon slices in layers in the jar and sprinkle some nigella seeds and peppercorns over each layer. When you have crammed all your lemons into the jar add the cup of salty water. The lemons should be completely immersed in the liquid - if you need a bit more liquid you can use a bit of the water you had the lemons in.
5. Seal the jar and store in a dark place for 2-3 weeks. After 2-3 weeks store the jar in the fridge and use as needed.

Preserved lemons can be eaten whole, including the skin.