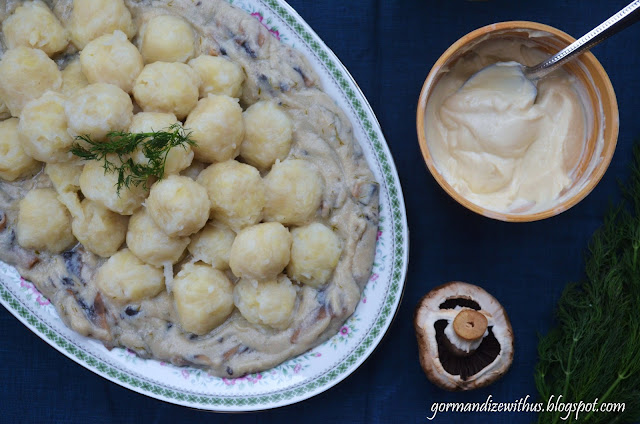 Dumplings are a universally comforting food - from the fried or steamed Chinese dumplings dipped in tantalising chilli and soy sauce, to the hearty and satisfying potato and vegetable based dumplings of Eastern and Central Europe, there is something about dumplings which satisfies the soul as well as the stomach! Generally, I've had a lot more experience making the Chinese variety than the European ones, but that changed when Poland was requested by a reader to be featured on the blog.

This June and July you'll see a lot of Polish recipes, and that is going to include some dumplings! Dumplings in creamy I-can't-believe-it's-vegan mushroom sauce. When I made these and served them up it looked like a bit too much sauce and I made a mental note to alter the recipe - but when I served them up we mopped up every little last big of that sauce and could have had more! So I didn't alter the recipe, you're going to want that much of this sauce!

I used my home made vegan sour cream in this recipe, and the result was luscious and super creamy! I can't predict how it will turn out with store bought vegan sour cream, but making it was really, really easy. So you can jump over to my recipe here and make some yourself. 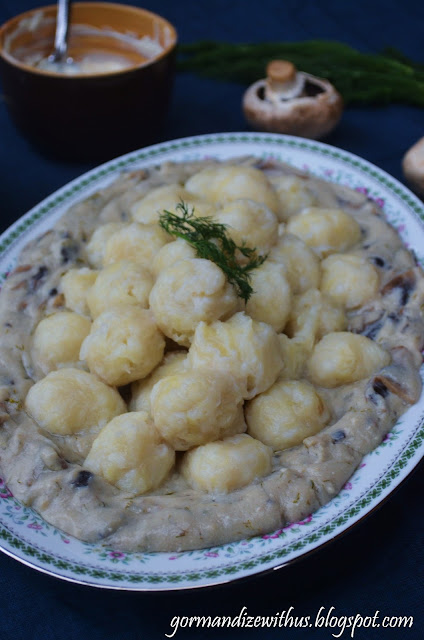 To Make
1. Grate half of the potatoes raw and place in a strainer placed over a bowl. Leave to drip dry for at least half an hour then use the back of a spoon to push any remaining liquid out. Keep the liquid though!
2. Roughly chop the other 500g of potatoes and boil until tender. Mash and place in a bowl with the grated potato and the flour. Mix well.
3. The leftover liquid should now have settled and separated out, gently pour off the clear liquid from the top and add the starchy sediment to the bowl of potatoes and flour. Mix well.
4. Your dumpling mix should now be a thick and sticky consistency that you can roll into balls - if it is too dry add a little water, if it is too wet you can add a little more flour.
5. Dust your hands with flour and roll into walnut sized balls. Set them aside while you make the sauce (you'll boil them just before you need to serve them).
6. To make the creamy mushroom sauce: wash and slice the mushrooms. Melt the margarine in a saucepan and add the flour. Stir vigorously to form a smooth paste. Gradually add the hot vegetable stock, just a little bit at a time, and stir well to keep the sauce as a smooth paste. Continue until all the stock is added.
7. Add the mushrooms to the sauce and bring to a simmer. Simmer for 5 minutes, or until the mushrooms are cooked. Add the sour cream, dill and season to taste and then remove from the heat.
8. To cook the dumplings - bring a big pot of water to the boil and gently add the dumplings. Stir gently to make sure none stick to the bottom. Boil for about 10 minutes, you'll know they are done when they float to the surface (you may have to do 2 batches to get them all done). Serve hot with the mushroom sauce and garnish with extra dill as desired. 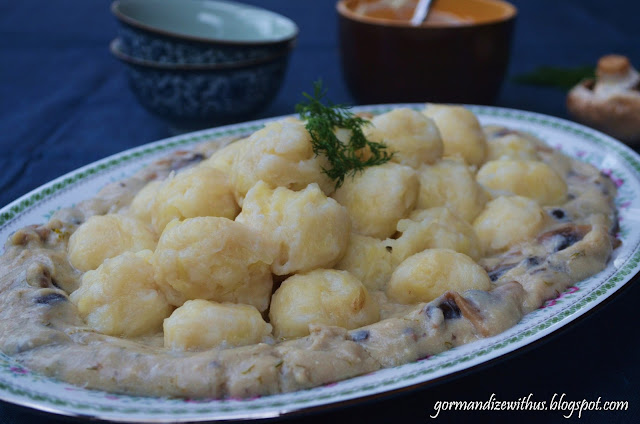 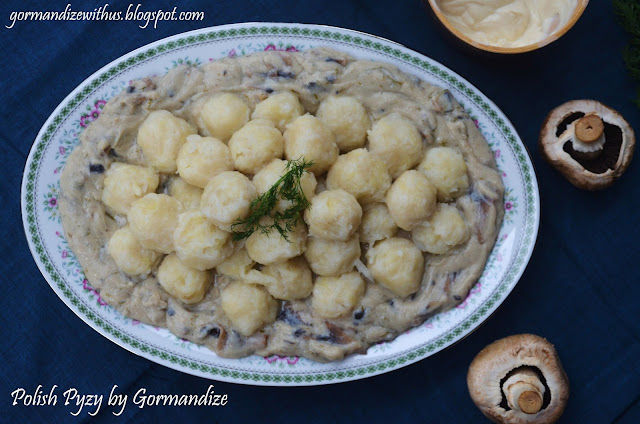