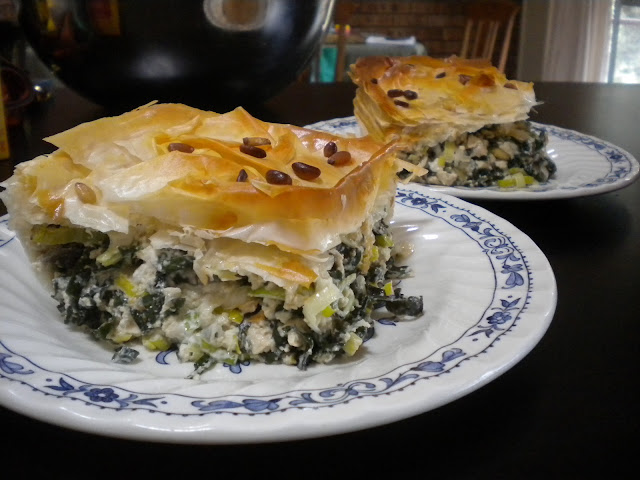 Welcome to March at Gormandize with A-dizzle and K-bobo!! This month we will be featuring recipes inspired by Bosnian cuisine and we're getting off to a pretty special start with this great zeljanica. Firstly, a bit about Bosnia! Bosnia is often used singularly to refer to the country of Bosnia & Herzegovina, a European country bordering Croatia, Serbia and Montenegro. Due to it's close proximity to Croatia there are several dishes which overlapped with the foods we presented for Croatia Month (January 2012 - to see our wonderful Croatian recipes visit here!) Bosnia & Herzegovina is almost entirely landlocked except for a tiny 20 kilometres of coastline along the Adriatic sea. Bosnian food is largely Mediterranean but with strong Turkish and Middle Eastern influences.


One big thing to start with in Bosnian Cuisine is the prevalence of spinach and cheese pastries! There are many, many dishes of spinach and cheese pies, strudels, triangles, rolls and any other way you could possibly think of wrapping spinach and cheese in pastry!This delicious cheese and spinach pie was a challenge to adapt to veganism - but the result was well worth it. This pie uses 3 substitutes for dairy-based cheese: tofu, vegan feta cheese and vegan cream cheese. The vegan feta cheese I made myself using this recipe from Maple Spice, it made a very rich and creamy feta using almonds and lemon juice. This is what mine looked like after baking (I think I overcooked it slightly but it didn't seem to make any difference): 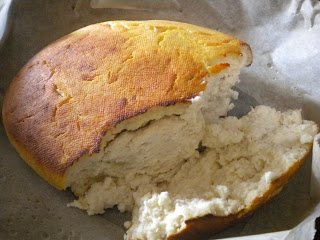 It was delicious but it wasn't very cheap to make and it was a bit heavy. I've personally always had a love of the slightly crumblier Australian style feta, and this feta recipe is a poor substitute for this. To address this I made my own feta recipe which is designed to be crumbled and used in salads and on pizzas and in pasta, see this recipe here for my vegan feta cheese.

However, the baked almond feta from maple spice works very well in this recipe as it adds a creamy nutty-ness to it. The other thing I should note about this pie is that it has a slightly fresh flavour which comes from the fact that the leeks aren't cooked before they are baked in the pie. This makes for a slight raw onion-y after taste which is perhaps not to everybody's personal taste. You should give it a try - as my partner said he thought that it was the best thing about the pie. However, if you don't like the sound of that then you can just lightly sauté the leeks before mixing them into the rest of the pie filling.

The other thing you should know is that this make a big mother of a pie - so invite some friends around to help you eat it!

Zeljanica (Bosnian Spinach and Feta Pie)
Ingredients
600g hard tofu (this is sometimes also called 'extra firm' tofu)
4 tbsp lemon juice
1 tsp salt
1 tsp cracked black pepper
1 cup crumbled vegan feta (I think you can buy this in some places but not where I live so I made my own almond feta using this recipe from Maple Spice)
1 leek, thinly sliced
1 big bunch spinach, trimmed and thinly shredded
230g vegan cream cheese (1 tub Toffuti)
50g whole pine nuts
Plenty of olive oil (or you can use melted vegan margarine if you prefer)
1 packet Filo Pastry sheets (I recommend using the one you can find in the cold section as opposted  to the freezer section, however, if using frozen then take them out of the freezer the night before and thaw them in the fridge completely before use)
To Make
1. Preheat your oven to 160 degrees C.
2. Crumble the hard tofu into a big mixing bowl (use the biggest one you’ve got – just makes it easier for you). Add the salt, pepper and lemon juice and mix well.
3. Add the leek, spinach and vegan feta and mix well to combine (you’ll need to mix pretty thoroughly as the spinach will want to be on top and the tofu will want to be on the bottom but you mustn’t let them!)
4. Add the cream cheese and mix well, this will take a bit of effort and you may find it easiest to just get your hands in there. 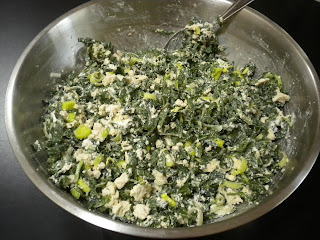 5.  Pour some oil into a ramekin or bowl and use a pastry brush to coat the bottom and sides of your baking dish (you’ll need a fairly big one - use the biggest one you own!).
6. Now, open the box of filo and spread it out, covering it will a slightly damp tea towel (note – not too damp! A good way is to wet your hands well and then dry them on the tea towel and then repeat this) to prevent it from drying out while you work.
7. Peel the first layer of filo off and line the bottom of your dish (don’t worry if it breaks up a bit or splits, you will be putting more layers over the top).
8. Brush the filo with more olive oil and then repeat with a second layer of filo. Continue until you have 8 layers of pastry. 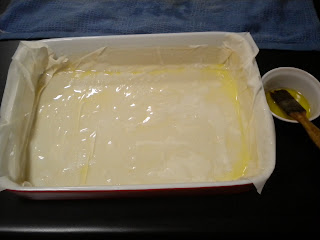 9. Put half the spinach filling into the bottom of the pan and press down to make it even. Sprinkle with 1/3 of the pine nuts). 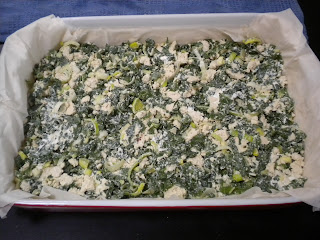 10. Layer another 5-6 layers of filo dough on top of the filliing.
11. Put the rest of the filling on top of this layer and flatten the top out. Sprinkle another 1/3 of the pine nuts on top. At this point if you have any ends of filo hanging over the dish you can either fold them into the pie or trim them (I usually fold them in because I don’t like to waste stuff).
12. Layer the top of the pie with another 6 layers of filo. Trim the edges neatly.
13. Decorate the top by taking the remaining few pieces of filo pastry, rip them into big pieces and scrunch them gently. Place on top of the oiled top of the pie in a way that looks pretty. Brush with olive oil and sprinkle the remaining pine nuts on top. 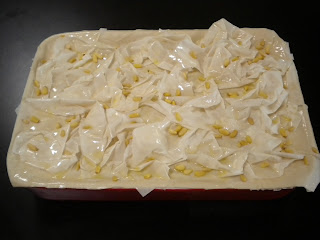 14. Bake for about 30 minutes, turning half way to ensure even cooking.  Keep an eye on it during the last 10 mins to make sure the edges don’t burn.
15. Remove from the oven and allow to stand for about 10 mins before serving (this will make it less likely to break up as you are serving it out).
Makes 1 big pie! Serves about 6. 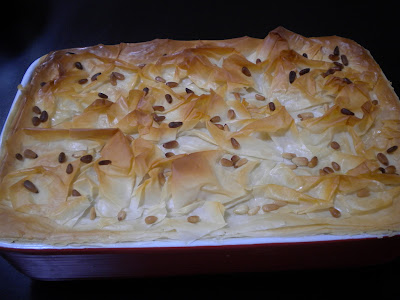 Check out our other Bosnian recipes: