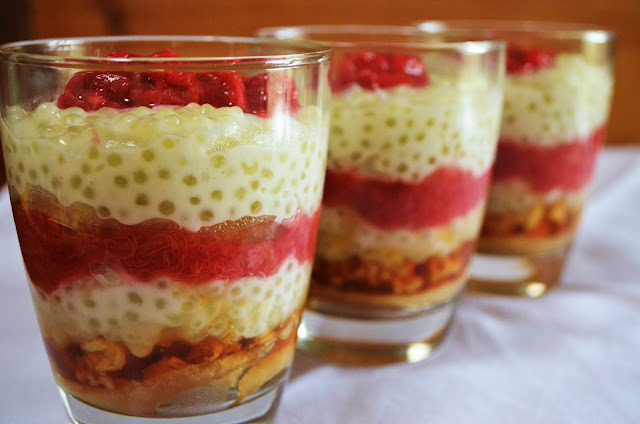 When the Sweet Adventures Blog Hop Hosts announced their next theme to be "Layer upon Layer" I was a bit at a loss. There are lots of things that immediately spring to mind - layer cake, baklava, slice, trifle etc. None of these things really excited me though, plus I really wanted to make something healthy and not too heavy! I have to admit that sometimes I find these blog hops a bit difficult because I just wish I could cook something savoury instead! I eventually decided a fruit parfait would be a healthier option than any other that I could think of - however, I was still faced with the layers of cream all through it. Then it hit me like a cream pie in the face - sago!

I love sago. Love love love it! It is the perfect alternative to cream and to custard (as you can see in my Vegan Strawberry Cherry Sago Trifle!) On a recent trip to my favourite Asian supermarket I found the most amazing thing..... green sago!! Green sago (thought I should say it again for emphasis!). As far as I can see it really is just sago with some food colouring because the ingredients just say 'sago'.... so evidently it is just sago. But check it out!!!!! 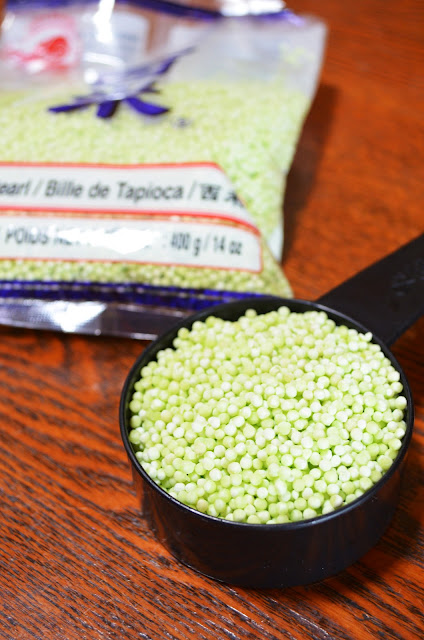 So once I had decided on sago parfait I knew that I just had to use my new green sago. I decided to combine it with the rhubarb that was growing abundantly in my garden and what better partner to go with rhubarb than apple? Rhubarb and apple are quite a classic combination - however combining them with sago?? Well it was amazing! The fruity sago layers are creamy yet refreshing, and the whole parfait is an amazing mixture of textures! Stringy, pulpy rhubarb and firm sweet apple pieces combined with the amazing creamy pearls of sago and then a beautiful surprise at the bottom in the form of crunchy, syrupy walnuts!! 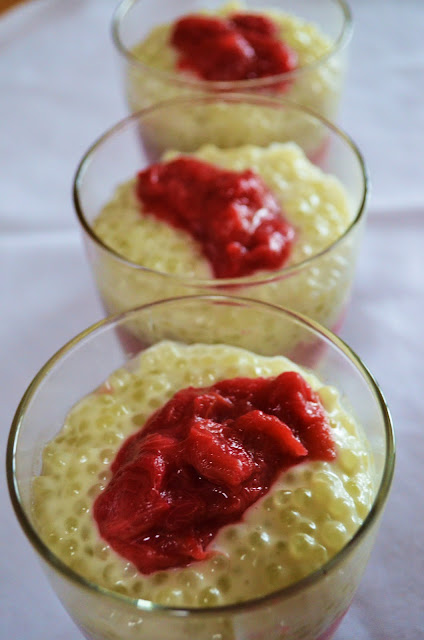 To Make:
1. Heat the coconut milk, water and sugar in a saucepan until sugar is dissolved. Bring to a gentle simmer and add the cinnamon stick, vanilla bean and sago. Stir while bringing to a simmer. Simmer, covered over a low heat for 30 minutes, stirring frequently. Remove the cinnamon stick and vanilla bean and allow to cool.
2. Heat the other cup of water in another saucepan and add the sugar. Leave on a low heat until all the sugar has dissolved. Add the lemon juice.
3. Peel the apple and set the peel aside (you'll use it later!). Cut the apple into quarters, remove the core and slice the apple into slices about 1/2 centimetre thick. Add the apple to the saucepan and simmer, covered, for 4-5 minutes. The apple slices should be just tender but not mushy! Remove the apple slices and set aside.
4. Add the apple peel to the saucepan and leave the syrup on a low heat to simmer, uncovered, for 15 minutes. After 15 minutes turn off the heat and remove the apple peel. Allow to cool.
5. In another saucepan combine the 1/3 cup water and the rhubarb. Cover and simmer for 10 minutes. Remove lid and simmer gently for another 5 minutes, there should be little or no water left. Mash the rhubarb with a fork until you have a lovely mushy rhubarb pulp. Add 2 tbsp of the hot syrup that you have simmer in the other saucepan (I'm assuming you are cooking all of these elements at the same time, I did!!). Remove from the heat and allow to cool.
6. Allow the sago, apples, syrup and rhubarb to cool to room temperature before assembling (don't refrigerate - all the elements will congeal and you will find it hard to layer it!).
7. Take 4 wide short tumblers (like scotch glasses) or small glass bowls. You could also use wine glasses or Martini glasses. Place a few slices of apple on the bottom of each glass and then layer 1/4 of the walnuts into each one - breaking them up into smaller pieces as you do. Spoon 2 tbsp of the syrup (which has cooled to a lovely thick honey like consistency) over the walnuts. This will be the lovely syrupy walnuty surprise at the bottom!
8. Layer the rest of the ingredients into the glass/bowl in this order: sago, rhubarb, apple, sago and then a spoonful of rhubarb on top. Chill for at least an hour in the fridge before serving. Enjoy!

Makes 4 individual parfaits (will vary depending on the size of your tumblers/bowls). 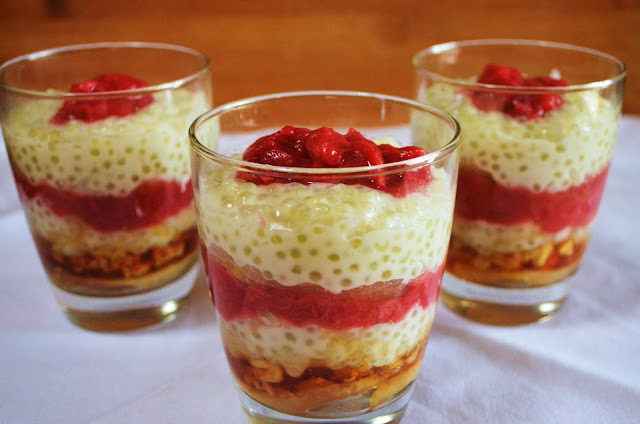 This is part of the March Sweet Adventures Blog Hop. Check out all the other layered desserts in the hop by hitting up all those little tiny pictures you see here: